Forrest J Ackerman co-founded the magazine Famous Monsters of Filmland in 1958. The magazine was a product of the classic horror film revival brought about by the Shock Theater package of films that aired on television stations across America in 1957.

“Forry” was also a life-long collector of horror and science fiction memorabilia. In fact, his home, “The Ackermansion” was open to the public until his death in 2008.

Ackerman also appeared in bit parts in over 200 films, including The Howling and Michael Jackson’s Thriller music video.

Ralph Bellamy appeared with Bela Lugosi in The Ghost of Frankenstein (1942).

Bellamy’s extensive filmography also includes the horror classic The Wolf Man (1941) as well as screwball comedy classics His Girl Friday and The Awful Truth, both co-starring Cary Grant.  One of Bellamy’s most famous roles was that of Franklin Delano Roosevelt. Bellamy played the president in both the Broadway and film versions of Sunrise at Campobello.  He continued acting in film and television up until 1990.

Carroll Borland appeared in the stage version of Dracula as one of Lugosi’s victims before being cast with Lugosi as Luna Mora in Mark of the Vampire (1935). She had a lifelong fascination with Lugosi, writing a novel entitled Countess Dracula, rhapsodizing about dancing the tango with Lugosi at the Hollywood Roosevelt, and finally sharing memories of Lugosi’s funeral (even though she didn’t actually attend the event).

Borland retired from acting in 1953 and became a college professor. She reappeared in the 1983 film Scalps and acted in one final film, Biohazard (1985), before her death in 1994.

Carradine was an extremely prolific character actor — in fact he claimed to hold the record for acting in the most films — over 300! He appeared in numerous classic horror films, often to finance his own Shakespeare theater company, John Carradine and His Shakespeare Players. Among his horror roles, he counted Bluebeard (1944) as one of his personal favorites.

Currie attended Sarah Lawrence College in New York, where she became interested in acting. She relocated to Hollywood and entered Max Reinhardt’s drama school. Upon completing her studies, Currie starred in her first film Billy the Kid Outlawed (1940) for PRC.

Currie went on to act in many westerns and serials, including Adventures of Captain Marvel (1941). She acted in many films for Monogram Studios. In fact,  Monogram head Sam Katzman referred to her as “the Katharine Hepburn of Monogram Pictures” due to her resemblance to the legenday actress.

Currie retired from acting in the early 1950’s and started a business with her husband, former actor John Good, remodeling and redecorating homes. She passed away in 2013 at age 100.

At age 4, Janet Ann Gallow appeared with Bela Lugosi in The Ghost of Frankenstein (1942).

Gallow worked as a child actor from 1942 to 1946 appearing alongside screen legends such as Abbott and Costello, Buster Keaton, Lon Chaney Jr., Dana Andrews, and Ray Milland. Currently, Janet enjoys her place in horror film history by occasionally appearing at conventions. She also recently made a cameo appearance in the short film Living on a Prayer.

Along with Edward D. Wood Jr., Alex Gordon is credited for the original story and screenplay for the Bela Lugosi film Bride of the Monster.

Gordon went on to produce films such as Day the World Ended (1955) and The She-Creature (1956) for AIP. He then became an independent producer of B movies including The Atomic Submarine (1959) and The Underwater City (1962). He ended his film career at 20th Century Fox where he instituted a film restoration program.

Anne Jeffreys appeared with Bela Lugosi in two films: Zombies on Broadway (1945) and Genius at Work (1946).

Singer/Actress Anne Jeffreys made her first film I Married An Angel, in 1942 with Nelson Eddy and Jeanette MacDonald. She went on to be under contract to Republic and RKO studios and starred in numerous crime and western films, alongside actors such as Robert Mitchum, Frank Sinatra, and Randolph Scott.

Laemmle is the niece of Universal Pictures founder “Uncle” Carl Laemmle. She literally grew up on the Universal lot, living at the studio from 1921 to 1937. Her first film was the 1925 silent version of Phantom of the Opera.  Laemmle played the prima ballerina in an uncredited role.  In 1931, she was cast in a small part in Dracula, speaking the film’s opening line.  At age 102, she was still acting, working in the film  Mansion of Blood. She passed away in 2014 at age 104. 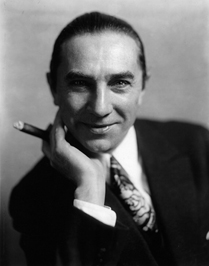 A native of Hungary, Bela Lugosi began his acting career on the stage in 1901 and started appearing in films during World War I, fleeing to Germany in 1919 as a result of his left-wing political activity. In 1920 he emigrated to the US and acted in the theater and in films before achieving stardom playing Count Dracula in the 1927 Broadway stage adaptation of Bram Stoker’s novel. The play ran for three years and was adapted to film by Tod Browning in 1931, establishing Lugosi as one of the screen’s greatest horror stars. After the horror ban of the mid-1930’s, Lugosi often had difficulty finding work and starred in many low-budget “Poverty Row” films.  He ended his career working for the legendary “Worst Director of All Time,” Edward D. Wood Jr. He died in 1956 and  fittingly was buried in his Dracula cape. 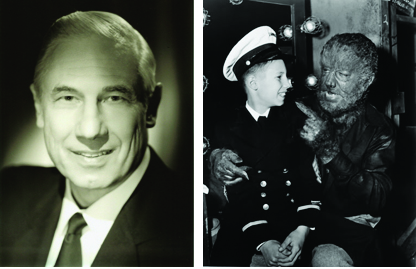 Bela G. Lugosi is the son of Bela and Lillian Lugosi. In 1966, Lugosi, a California lawyer, sued Universal Studios for using his father’s personality rights without his heirs’ permission.  The case (Lugosi v. Universal Pictures), led to the creation of the California Celebrities Rights Act.